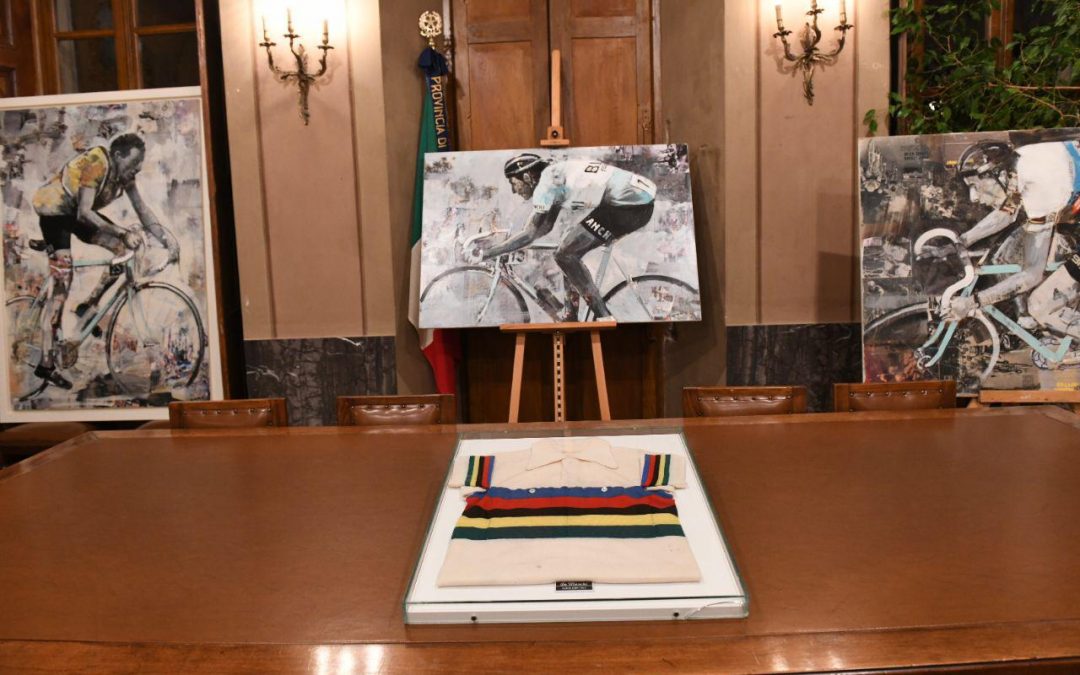 AN EXHIBITION AND A CHILDREN’S WORKSHOP: IT IS THE EVENT ORGANIZED WITH THE PATRONAGE OF LOMBARDY REGION IN VARZI, IN THE OLTREPO’ PAVESE, WITH SOME IMPORTANT MEMORABILIA FROM THE COLLECTION OF THE GHISALLO MUSEUM.

January 2020, Monday 13, Varzi (Oltrepò, province of Pavia) – In the council hall of the municipality of Varzi, a municipality of the Oltrepò Pavese where the Champion won his first race in 1939, the exhibition sponsored by Lombardy Region and entitled “in arte Coppi” becomes a laboratory for boys and girls. They are protagonists of another public event: on Tuesday 14, in the afternnon, the work with the painter Miguel Soro (whose works are on display from 28 December 28 to Februar 2) and with the writer Gino Cervi, author of Alfabeto Fausto Coppi (Ediciclo publisher) a serie of 99 short stories and a song.

The event continues a successful exhibition of Lombardy Region (dedicated to the centenary of Coppi and Brera) in Varzi where the Champion is loved and remembered as a son.  The exhibition “in arte Coppi”, dedicated to the two-wheeled myth, showcases some works by Miguel Soro and some memorabilia of the Cycling Ghisallo Museum and Alessandria City of Bicycles (where until February 2, at Monferrato Palace, is “on stage” another exhibition entitled Shots, a dialogue between photography and painting always in the sign of Fausto Coppi.

In arte Coppi in Varzi celebrates the centenary of Fausto Coppi that has just ended, with the aim to extend the celebration in 2020 as year of the 60th anniversary of the death of the Champion.

The mayor of the municipality of Varzi, Giovanni Palli, wanted to organize this exhibition “In arte Coppi” exhibiting an important part of the artistic production of the Spanish painter Miguel Soro who dedicated almost 50 works to Fausto Coppi “to emphasize in the centenary of our myth the link with Varzi, where the Champion won his first race, starting a formidable career (May 7, 1939)”.

“To celebrate the Champion – continues the president of the Comunità Montana, Giovanni Palli – we do not want to talk about his victories but to tell the value of this myth, which has built his success as a champion and as a man struggling on the roads our surroundings, making our places – that have always been aimed at cycling and outdoor sports – loved even more.”

“We want Coppi to be an example of courage and humility who can still excite our youth. To pursue the involvement of the youngest, the Municipality of Varzi through its councilor of culture Federica Lazzati and the City Council of Girls and Boys, will be the protagonists of the first workshop of painting and literature open to middle schools of the school Institute P. Ferrari.

From Valencia will come the painter Miguel Soro who will create a live work with the boys, developing the words written by Gino Cervi, writer and journalist sensitive and attentive to the depth of the story, in addition to the sport one. The participation of the writer Gino Cervi, author of “Alfabeto Fausto Coppi” (Ediciclo publisher) is perfectly consistent with Varzi’s love for the Champion: there is one of his beautiful stories, written with Giovanni Battistuzzi. The workshop will therefore be a concert of colors, images, newspaper clippings and writing, so that the testimony of the champion can really remain eternal through emotions and sharing.

THE EXHIBITION IN ARTE COPPI – Ten works by Miguel Soro on display in the magnificent council hall of the Malaspinian municipal headquarters also two important memorabilia such as the Fausto’s bicycle, when he was a young shop assistant (Chiapuzzo Collection, loaned by the Acdb Museum in Alessandria) and the jersey of world champion wore by Fausto Coppi, conquered in Lugano in 1953, a loan from the Cycling Ghisallo Musum in Magreglio; and – close the list – the Bianchi 1947 of Fausto Coppi’s teammate and assistant Bruno Pasquini (Trevisan collection).

Click here for the video of the exhibition inauguration