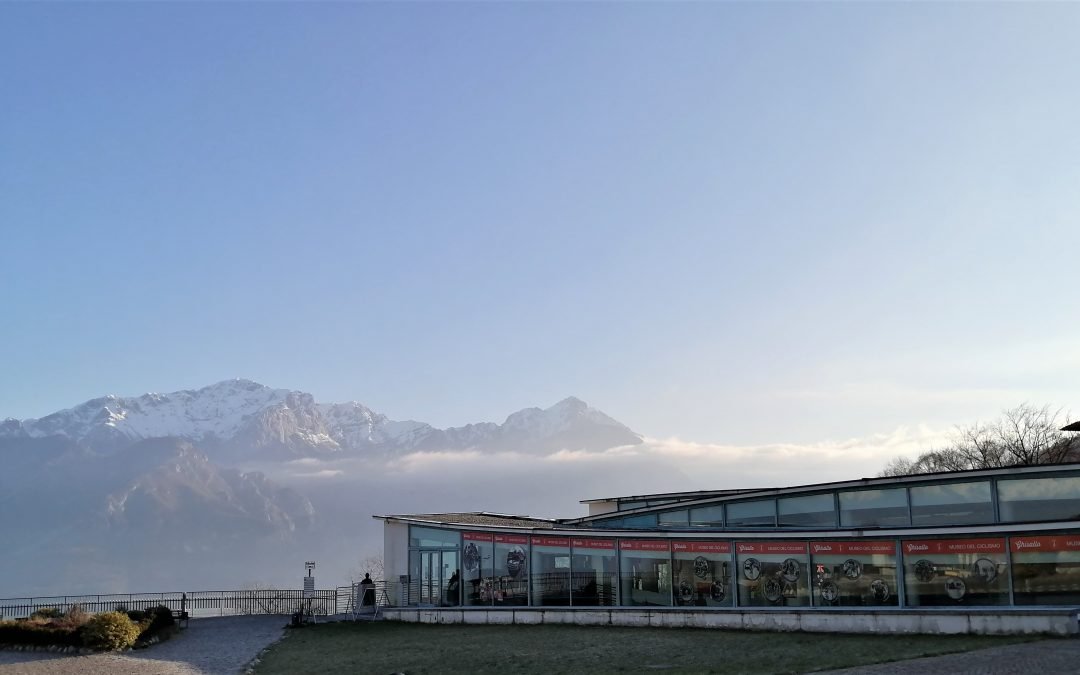 “Wherever you go, you will always be uphill and against the wind.” (The First Law of cycling) – Arthur Bloch

2020 is now at the starting line. Before resuming the new season, a final budget for the year just ended can be an encouragement and a stimulus to meet the commitments and challenges that lie ahead. During 2019, the Ghisallo Museum has proved, in fact, to be an exceptional driving force of culture and territorial marketing.

The attendance figures record a total of 13400 visitors, improving the previous year’s result. More then 1400 of these visitors attended the events that were organized, promoted and hosted from March to November. It is undoubtedly an achievement that motivates even more to elect the Museum as a reference point for the territory both culturally and at the tourist level.

Just think that more than 50% of visitors come from 67 different countries: the top five are the United States (14%), England (12%), Germany (11%), Australia (11%) France 9%). What certainly fills us with pride is the important presence of Italian visitors, which in 2019 for the first time has almost touched the 50% share.

What certainly fills us with pride is the important presence of Italian visitors, said the Museum Director’ Carola Gentilini, which in 2019 for the first time has barely touched the 50% share.

The Museum of Ghisallo had to regain the passion of Italians who had been “beaten” in recent years in a positive challenge, to the appearance of entrance tickets, by international visitors, much more likely to show affection for the museum. Instead, perhaps also correcting the events and promoting the cultural reviews in the right way, insisting on the reception and the offer of services, we have almost evened the gap. The result of 2019 is therefore a clear push for an ever greater and complete enhancement of a cultural heritage that our Museum protects and preserves, in order to research, study and archive enrich and rebuild the Great History of Cycling, to spread it better among enthusiasts and non-enthusiasts.

The activity of the Museum, as always and as announced in the Lombardy Region, at the beginning of the season gave space to the events that were numerous, attended and very intense: They have been organized along the museum’ season calendar, from March to November, to offer purely sporting moments alternating with more institutional and cultural moments.

2019 was the year of the inauguration of the bust of Fiorenzo Magni, followed by the vernissage of the exhibition “Veni Vidi Bici” by Riccardo Guasco in March; the visit of the Lecco Masters of Labor and the donation of the Como-Beijing 2005 marathon cycle bike in April; the inauguration of the Polstrada Section, the visit of the schools involved in the road education project “Pullmann Azzurro at the Giro d’Italia” and the day “E-bike journalists” in May; the surprise visit of sculptor Elio Ponti, the presentation of the book Dodici secondi [Twelve Seconds] by Gianbattista Baronchelli, the theatrical show (promoted by BCC Brianza e Laghi bank institute) dedicated to Alfonsina Strada, the inauguration of the exhibition of the Seventy Years of Sanctuary with the presence of Your Rev. Mario Delpini [“To ride is a poem, a special gift”] in June; the presentation of Gianni Torriani’s book, “L’ultimo patron”, and the Concert of the Bellagio Festival in July; the conference “From St. Ambrose to Bartali and Coppi” with art critic Marina Mojana and, on the occasion of the 500th Leonardesco, the conference “Practically a genius” on Leonardo Da Vinci and the bicycle in August; the press conference of the Tour of Lombardy in September; the inauguration of the Paracycling Section and the 5th Edition of the ride from Vigorelli to Ghisallo in October.

The museum activity has also translated in 2019 in the management of the more than 30 loans, which have affected more than 100 “circulated” memorabilia throughout Italy. By virtue of The Centenary of Coppi the most requested were his memorabilia, in particular the bike of the 1942 hour record at Vigorelli.

The applications for loans were received by local authorities (mainly municipalities), but also and especially by private companies for various events: inaugurations, exhibition venues, exhibitions, but also only for individual evenings, in order to have memorabilia proven value.

Finally, the increasing number of requests to use the meeting room for corporate conventions; as well as to highlight the increasingly constant proposal of donations.

We can not start the new year without two special thoughts.

The first to the Champion (60th of death) and to the Pirate (50th of birth). We want to remember them in the words that in the book La vita è una ruota. Storia resistente di uomini, donne e biciclette (Ediciclo, 2014) [Life is a wheel. Resistant history of men, women and bicycles] Alfredo Martini dedicated to Fausto Coppi and that in our opinion are also befitting Marco Pantani: “To amplify, in space and time, the poetry of Coppi … and Pantani [we add], it was also his death. He suddenly kidnapped him young, to leave us eternally young. And we all to try to find an explanation, to compare and to imagine, to rediscover and to investigate. Knowing that something about him will always remain in the mystery. Like a magical adventure.”

Our second thought goes to Whome, who of the Museum was not simply a founder, was a real Father. In the centenary of Fiorenzo Magni‘s birth we are already “saddle up” motivated to pay tribute to His indelible memory. Follow us, indeed: ride with us!