FIORENZO MAGNI AND THE LAW OF AVERAGES 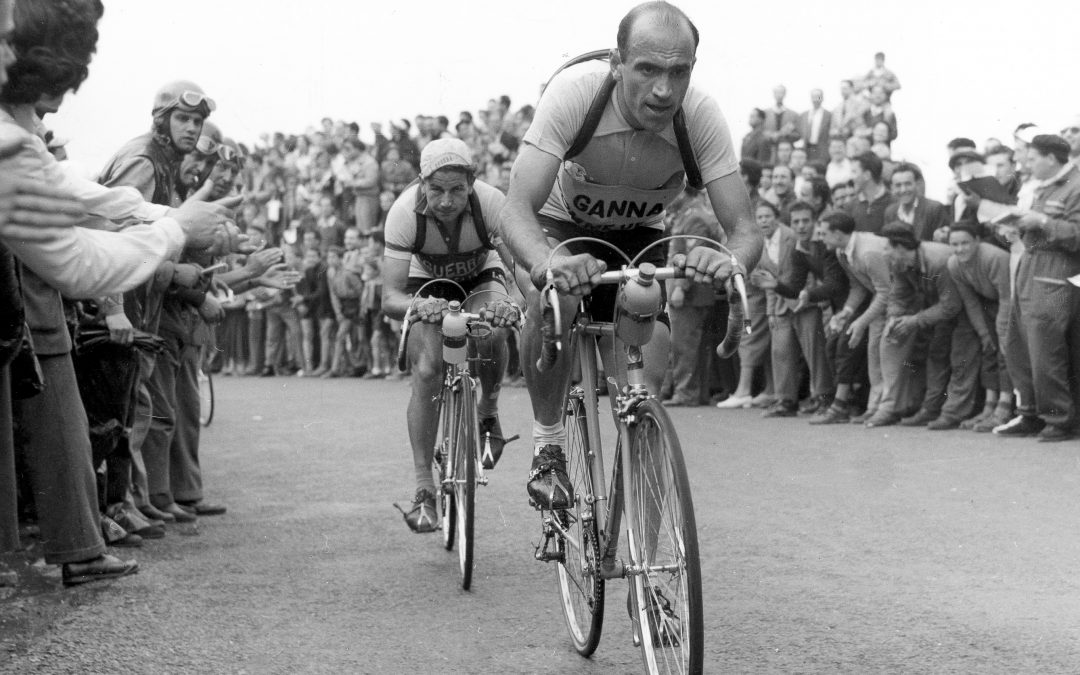 «When you think about the Tour of Flanders, your thought goes to to Fiorenzo Magni» Mario Fossati wrote. This is the law of averages: one, two, three…up to 100 that, in 2020, means Magni100. Fiorenzo Magni was born 1920, 7 December in Vaiano (Tuscany) and along the year of his centenary the Ghisalllo Cycling Museum will remember him in a flow of emotions. #Magni100 @LucianaRota

Three is Fiorenzo Magni’s number bacause it often recurring along the long story (he died 92 years age) of his life.

Fiorenzo Magni, the Lion of Flanders, the great cycling champion who challenged Coppi and Bartali. That strong man, coherent and fraternally friend with those who knew how to enter his heart so as not to run away, even after one hundred years.

Three is his number. He is often called “the third man”, in his challenge between Coopi and Bartali, but Magni placed First, Second and Third many times. His winnings were all important, like the three Tour of Italy and three Tour of Flanders. The strong determination to reach those goals was a cycling and life lesson, “an example” as he said. But he never joke on the three in the meaning of “third man”: it was an obsession that he ill-concealed. His family never mess around with this, because those who knew Fiorenzo Magni well knew that he did not like to be called the third. He liked to win. But he appreciated who won, too, Coppi and Bartali, his rivals, in spite of the clear preference for Fausto, of whom he declared himself a brotherly friend especially after Fausto’s sad fate.

In the 1950s the successful endeavours of Magni occupied entire pages of the Gazzetta dello Sport, relegating news about the end of the Italian football championship to the bottom of the pages…unimaginable today! That was cycling, at that time; the cyclists and theier fans were the protagonists of the sport great history written by journalist like Nutrizio, Fossati, Orio Vergani, Indro Montanelli…

Magni was a keeper of memories and taught everyone that nothing should escape from memory. Preserving the past to look to the future. It was his way of understanding life. The centuries don’t run away, or rather, come back. Like seconds. The first as the third ones, too. Nothing runs away in this hundredth anniversary. Fiorenzo Magni created a museum around and with his memories: the Ghisallo Cycling Musuem is his dream came true and it is the only museum in the world dedicated to all cycling champions. Nor the blessing of Our Lady of Ghisallo could missed, She that looks like to toast with us at Fiorenzo’s greeting, a sculpture that smiles at the entrance to the cyclists’ house, gift of Ernesto Colnago, a gift full of value and of great friendship. Happy Centennial, Champion! We find you here every day at Ghisallo. In three minutes. Three. For a hundred more years.