MAGNIFICO: THE GHISALLO MUSEUM’S TRIBUTE TO THE CENTENARY OF FIORENZO MAGNI 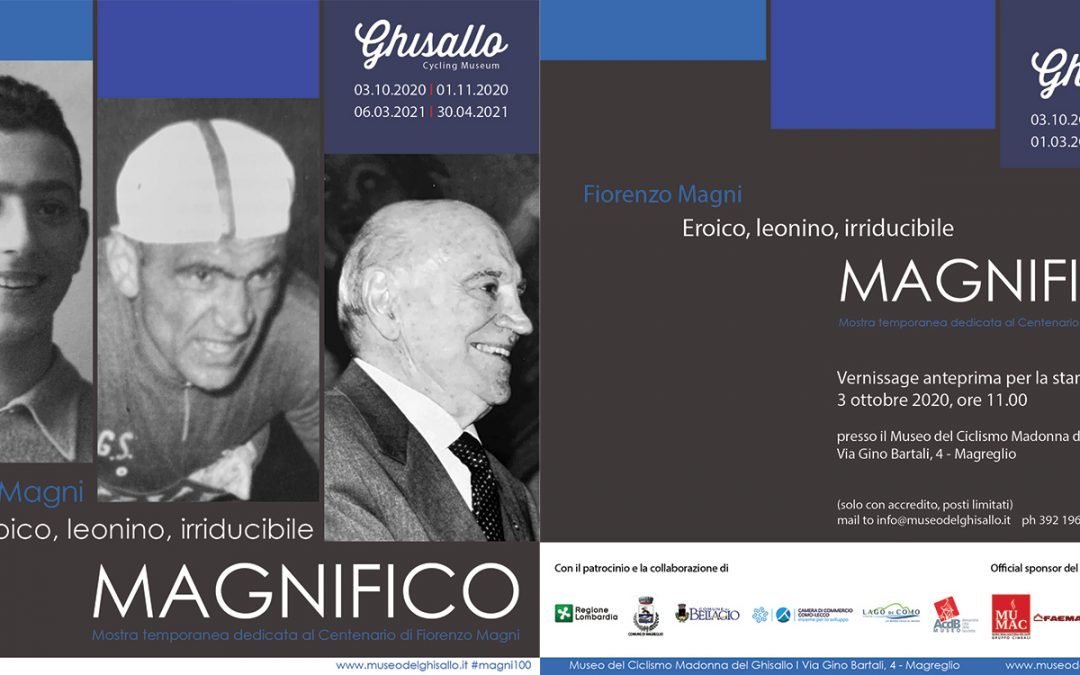 Saturday, October 3, 2020, at 11am, while respecting the Covid-19 protocols, is the press launch (accredited journalists only) of the MAGNIFICO exhibition, a tribute, dedicated by the Foundation Museo del Ghisallo to Fiorenzo Magni’s Centenary. After the customary winter break the exhibition will resume with the reopening of the Ghisallo Museum in March and continue until the end of April 2021. During the winter break the show will “pedal on” free to everyone, in an online version, offered digitally by both museums, Ghisallo and Museo AcdB, thanks to the Iconographic Archive project. The digital exhibition MAGNIFICO launches simultaneously on the web from the tech room of AcdB Museum in Palazzo Monferrato and live from the Ghisallo Museum in Magreglio.

MAGNIFICO is a exhibition of photographs dedicated to the Centenary of the famous Fiorenzo Magni, an athlete and champion who has dedicated more than 100 years to cycling. 100 years and more because, thanks to his museum and because of this exhibition, (traditional and multimedia) the entire history of cycling lives on.

Carola Gentilini, Museum Director, assembled her team led by Antonio Molteni, president of the Foundation, and with all those involved, has placed the exhibition in the three rooms dedicated to temporary exhibitions, at the Magreglio Museum, next to the Sanctuary. The launch is commensurate with the first day of the 2020 Giro d’Italia starting from Sicily.

MAGNIFICO is a long overdue tribute, which also traces an historic social era closely linked to cycling. This exhibition explores the history of Fiorenzo Magni, the Tuscan champion, who settled in Brianza where he lived and saw his greatest projects come to fruition.  Magni, for once, is not called “the third man” because this exhibition – in three large dedicated rooms of the museum, includes numerous pictures, captions and quotes, recognizing him as an Athlete, a Champion and an accomplished Man, champion among champions. A complete man, a real man, as Gian Paolo Ormezzano describes him in six words.

Following a thread of great events over the past 100 years, the exhibition retraces the career, the values, the friendships, the enterprises and the testimonials of those who have been part of his extensive world, thanks to his Museum. The Museum will remain open, as every year, until the first weekend in November and will reopen with the exhibition MAGNIFICO, after the winter break, on the first weekend of March. The exhibition, however, carries on during the seasonal closure thanks to the coproduction of the Digital Archive “History of Cycling and its Champions” of the twinned museums, AcdB Museum of Alessandria and Ghisallo.

Inauguration | Preview (11 am) for the press (only accredited individuals with select limited admittance) write to info@museodelghisallo.it and a 3 pm opening (admission limited to small groups respecting the Covid-19 protocols) the exhibition will continue when the Museum reopens in the spring.

Attending the Opening: the Magni family, local authorities, the Cycling Museum Foundation headed by its president, the friends of GS Ghisallo, the Regional Councilor for Culture, Stefano Bruno Galli, the Torriani family, a representative of the sister Acdb Museum of Alessandria (which, along with Ghisallo, maintains the Digital Archive Project), some Olympic cycling champions, gold medalist Marino Vigna, one of Magni’s and the Museo’s closest friends, and some champions of modern cycling; among these also the “Azzurri” Andrea Tonti and Luca Paolini who decided to come up the hill to the Museum on October 3 to pay homage to Magni and his museum on the occasion of their Como Raid Tour, a three-day training session based at the Castello di Casiglio di Erba . Not only that, Andrea Tonti, domestique de luxe of the great Paolo Bettini, creator of Bike Division – Cycling Tour Operator academy style – has decided to give his blue jersey to the Ghisallo Museum and to dedicate the gala dinner (For invitations and information email info@museodelghisallo.it) to the Casa dei Ciclisti donating the evening to the Museum.

As always, the partners of the Ghisallo Museum support all of our initiatives. A special thanks to Valsecchi Armamento Ferroviario and MUMAC Museo della Macchina per Caffè of Gruppo Cimbali which has supported the Cycling Museum since 2015. Thanks also to the Municipality of Bellagio which also supports us in this important Centenary event.