17 November 2020 | Histories, In the foreground, Technique, The bike 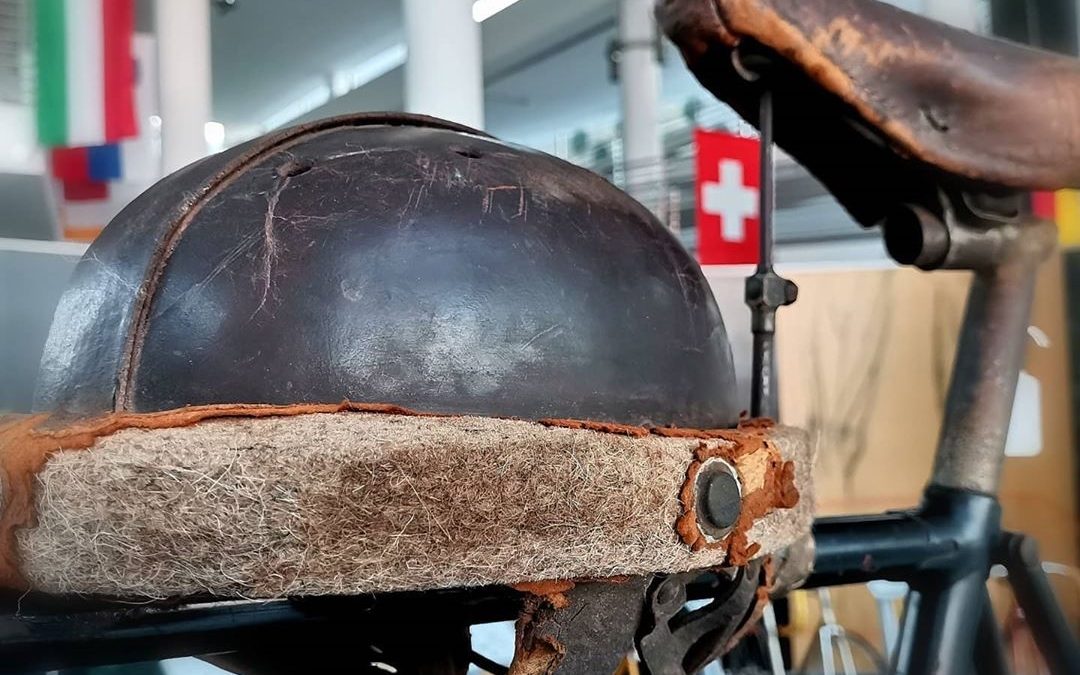 October 27, 2018 – October 27, 2020. Two years ago, the Museo received a donation from Mino, the son of Guido Bruno. It was the bicycle belonging to his father, who was the 1926 Stayer Champion (motor-paced track racing). @elenaornaghi

Utter the word “stayer” (moto-paced racing) and you think of defying the laws of gravity and speed, challenges which filled the velodromes with amazement and set fire to the wooden tracks with pure adrenaline. World championships included. In front were the daring motorcycle riders (hence the expression:dietromotori, motorcycle-paced), behind the crazy cyclists, between them a brace with a roller bar which the cyclists absolutely should not lose.

Gianni Bertoli wrote in an article published on November 19, 2013 in Cyclemagazine.eu: The stayer cyclist used a very particular bicycle. The frame was shorter than normal and, to stay as close as possible to the motorcycle, the fork was bent backwards and consequently the front wheel was smaller than normal. Of course, stories circulated … Scary stories. The cyclist wore normal track clothes with the sole addition of a motorcycle helmet.

The history of very special bikes speeds quickly up and down the Museum floors these days. And such a bicycle has found a home on the velodrome track of the Ghisallo Museum. It was just two years ago, and we remember it as if it were yesterday: time flies! On October 27, 2018, Mino Bruno donated his father Guido’s stayer bicycle to the Casa dei Ciclisti (House of Cycling).

For years the bike hung in the U.C. Comense headquarters at the Sinigaglia Stadium. Mino Bruno decided that the fate of this special bicycle, for obvious reasons, was not to remain stashed in a box. He chose to restore it. With the valued help of Domenico De Lillo (multi-titled in this specialty sport, world champion and member of the unforgettable blue team) in collaboration with the Velodrome of Orlico, the restoration became, in itself, a unique story. Every effort was made to preserve the original chassis, fork, handlebar and saddle. Other parts, especially the tires, needed some special intervention.

Last month, on September 11th to be exact, during his visit to Ghisallo, Domenico De Lillo showed us some features of this special bike, by addressing Museum followers in a live Facebook interview. See the attached YouTube link below. “With these sprockets we could only run with a huge ratio, because the rear cassette is small and matches the big ring with 50 or more teeth. Another feature of this bicycle, which was really well built for 1926, is the rear tyre, which, although, not original was manufactured in 1958. It is the wheel of an Italian, who raced in a MezzoFondo ( motor-paced track race). We recovered the wheels in Zurich”.

In the speciality of stayer (motor-paced track racing) each rider is preceded by a trainer on a motorcycle (a light motorcycle is a “derny” or a heavy motorcycle is a “MezzoFondo”), which allows him to reach very high speeds (70-80 km/h) by following in the slipstream. Whoever crosses the finish line first wins.