ALDO MOSER AT THE MUSE OF TRENTO. WITH SORO 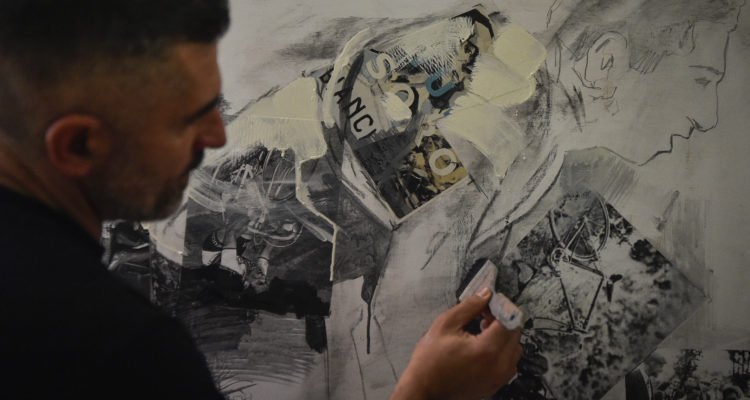 A traveling exhibition by Miguel Soro arrives at the MUSE in Trento which focuses on a work dedicated to Aldo Moser, unforgettable, romantic and heroic champion of twentieth century cycling, recently deceased and brother of Francesco Moser. When: Wednesday 8 September 2021 day inaugural of the European Road Cycling Championships. Until Sunday 12 September 2021. Where: at MUSE – Trento Science Museum – Course of work and science, 3

A work by Soro dedicated to Fiorenzo Magni, created on the occasion and for the MAGNIFICO exhibition, is still on display at the Ghisallo Museum. A work that tells the iconic episode of the determination and strength of the Lion of Flanders. Miguel Soro is a friend of museums and the Museo del Ghisallo, for which he exhibited and created one of his works Live. MIGUEL SORO THE PAINTER CYCLIST – Miguel Soro is a Spanish painter who belongs to the family of Valencian landscape painters, a genre that has seen him winner of numerous prizes and awards. In Italy he made himself known in the world of two wheels, as a former professional racer he established himself as the artist of “heroic” paintings: “: he paints and creates exciting works through a kind of” mixed collage “painting that made him famous all over the world for its collections dedicated to vintage cycling. Soro already exhibited in Europe and beyond, often sets up his paintings in the contexts of the most important cycling events, such as the Vuelta or the Tour de France. In Italy, his “monothematic” homage to Fausto Coppi, at Palazzo Monferrato in Alessandria, an event of the AcdB museum, had a great success. The exhibition dedicated to Coppi il Campionissimo became itinerant on the centenary of his birth, 2019, and led the artist to create over 50 works, all dedicated to him and successful. THANKS TO MOSER, HOMAGE TO ALDO – “I am very grateful to the Moser family and to Trento for this opportunity – said the artist – and I am particularly pleased to exhibit in the context of the European Championships and in a place that also has great passion for history of cycling. In Trento, those who like to remember the exploits of cycling champions, such as the great Aldo Moser, find themselves at home … And this is a Europe that rides rapidly towards important cultural goals. Where art also makes sense. In the story of sporting enterprises, in the memory of great champions and men, in the promotion of the true values ​​of cycling and life “. Miguel Soro has exhibited in Spain, France, Canada, Belgium and of course in Italy, the first time making himself appreciated in Gaiole in Chianti where for heroic cyclists he is a mythical artist. Before becoming a painter – Miguel Garcia Soro – he was also a professional runner. Born in 1976 in Xativa – Valencia, he raced for a Portuguese team and won some races. An excellent amateur, he wore the junior jersey by winning a team world title with Miguel Morras. As an artist he is highly regarded for his historical culture. His technique is also particular: he mainly uses a mixed collage acrylic paint and has a very rich curriculum in landscape painting competitions, having won numerous prizes in 10 years of activity, the last one in the Juan Frances painting competition, at his home, Xativa , at the end of August where he conquered everyone with the “Retrato de Juan Frances”. Acrylic / collage 120×150. For his style and his passion for cycling, he is much loved in Italy and abroad where he is believed to be the absolute protagonist of a new artistic genre – vintage and emotional. His works are inspired by photos and newspaper clippings representing legendary champions of world cycling. He knows how to give color and poetry to competitive gestures or to the typical expressions of the two-wheel champions that he himself obviously loves. The of him is – finally – also an experiential cycling and cycle tourism and his Italian tour comes perfectly close to the European mobility week (16 – 22 September 2021). TEMPORARY SHOW IN ARTE SORO 8-12 September 2021 MUSE di Trento For information Luciana Rota 392