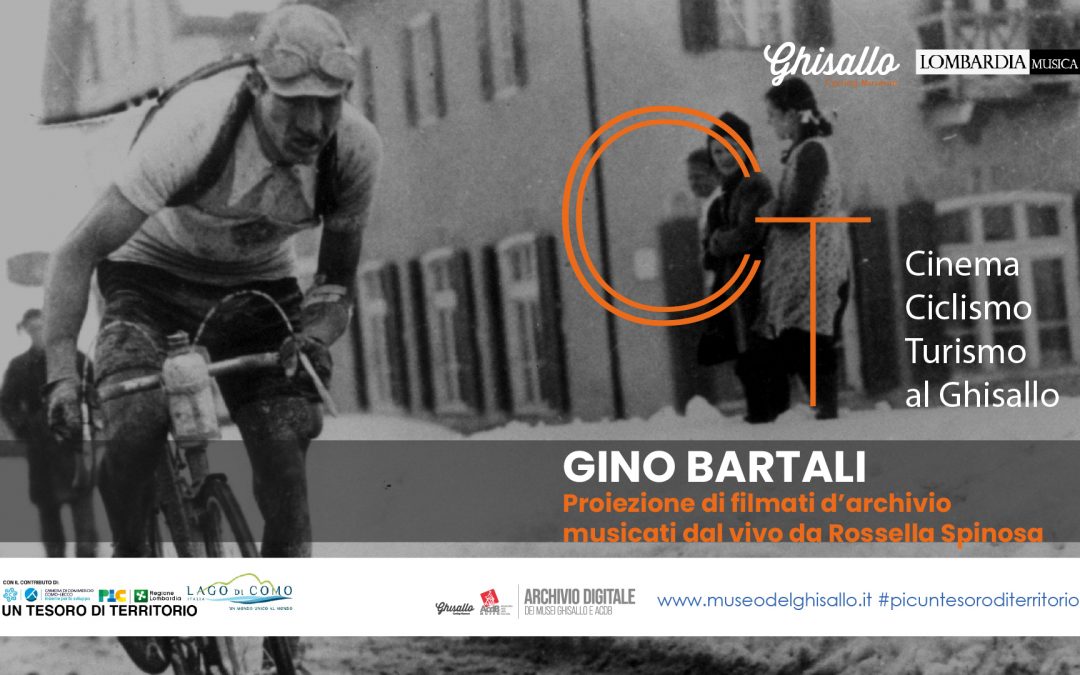 Saturday 2 April
Screening of unpublished films with original live music by Rossella Spinosa, a trubute to the Ginettaccio

The project, carried out as part of the two-year program of the cultural district of Lake Como called PIC, A TESORO DI TERRITORIO, financed by the Lombardy Region and coordinated and supported by the Como-Lecco Chamber of Commerce, aims to represent a new way for the full enhancement of an important territorial resource, such as the Museum located in the Municipality of Magreglio.

The meeting will be dedicated to a multisensory study dedicated to Gino Bartali, champion in sport, champion in life. Through historical films, we will retrace the extraordinary feats of a man who made the history of cycling and humanity, tying a tight knot of values ​​that have always linked sport to sociability and faith. Nicknamed Ginettaccio, Gino Bartali won three Tours of Italy (1936, 1937, 1946) and two Tour de France (1938, 1948), as well as numerous other races between the thirties and fifties, among which four Milan-Sanremo and three Tours of Lombardy. Righteous among the righteous, post mortem recognition, which also respects the thought of him as a champion of humanity: he used to say that good is done but not said, Gino Bartali saved many human lives and was always generous and committed to respecting others . It is a story, that of the Ghisallo Museum, with the PIC project, which outlines an epic of cycling: it does so through black and white images that blend with the accompaniment of the unpublished notes of Maestro Rossella Spinosa for a new multisensory experience which enriches the iconographic and musical heritage of the Digital Archive.

On the musical front, for this episode dedicated to Gino Bartali, the new music will not only be for piano but for flute and piano as explained by Rossella Spinosa:

“I chose to use a type of staff that was able to enhance the great personality of Gino Bartali: not just a sportsman, not just a man capable of winning, but a man capable of risking his life for others, for a social and supportive purpose. Between 1943 and 1944 Gino Bartali saved over 800 Jews by carrying false documents in the tube of his bicycle. Without fear, with courage, with determination, as when he won his competitions, but with that sensitivity and with that heart that only a Righteous can give. And to the flute the task of singing that true Goodness; at the piano the task of remembering his strength “. This is the profound compositional choice of Rossella Spinosa, engaged with the Conservatory of Mantua, the Maestro has always composed music for silent cinema and to date has made over 120 film titles, becoming a point of reference for film libraries, theaters and orchestras.

The production linked to the figure of Gino Bartali enriches the series of works created over the last season dedicated to the great Champions of the 1950s, Coppi and Magni, thus completing the multisensory trilogy curated and conceived with the Ghisallo Museum.

The induced effect, successfully experienced as early as 2021 (despite the Pandemic!) Is to create events capable of attracting the public and visitors. The compositional soul of the entire project is Rossella Spinosa, one of the most esteemed and internationally established composers in the soundtrack of non-sound cinema (silent and documentary), who has so far set music over 120 historical films, becoming the musical signature of the Cineteca Humanitarian for several years.

Below we recall the dates of the next appointments:

Saturday 16 April, 12 noon I The Hell of Paris-Roubaix

The screening will revive the history of the classic monument that takes place in the north of France, in the land of the cobbles, and is also known as “the hell of the North” (l’enfer du Nord), due to the hardships to which it subjects the runners. participants.

Saturday 30 April, 12 noon I Waiting for the Giro d’Italia

The pink stage race that rides through the wonderful Italian landscapes turns this year to its 105th edition. Dream of all professional riders, each edition offers great emotions. The film retraces the most significant sporting achievements.

All contributions will be presented with live performance of the original music composed ad hoc by Rossella Spinosa. To complete the program, two appointments on dates to be defined for the presentation of the two productions dedicated to Gino Bartali, which completes the trilogy and the one for women’s cycling, the dominant theme of the 2022 season of the Ghisallo Museum.

Museo del Ghisallo has always been a multisensory experience and it is demonstrated by pedaling even in this way. Music Maestro! The event is free to enter upon reservation.

For info and reservation