Cimbali Group with its FAEMA brand, official partner of the Giro d’Italia 2022 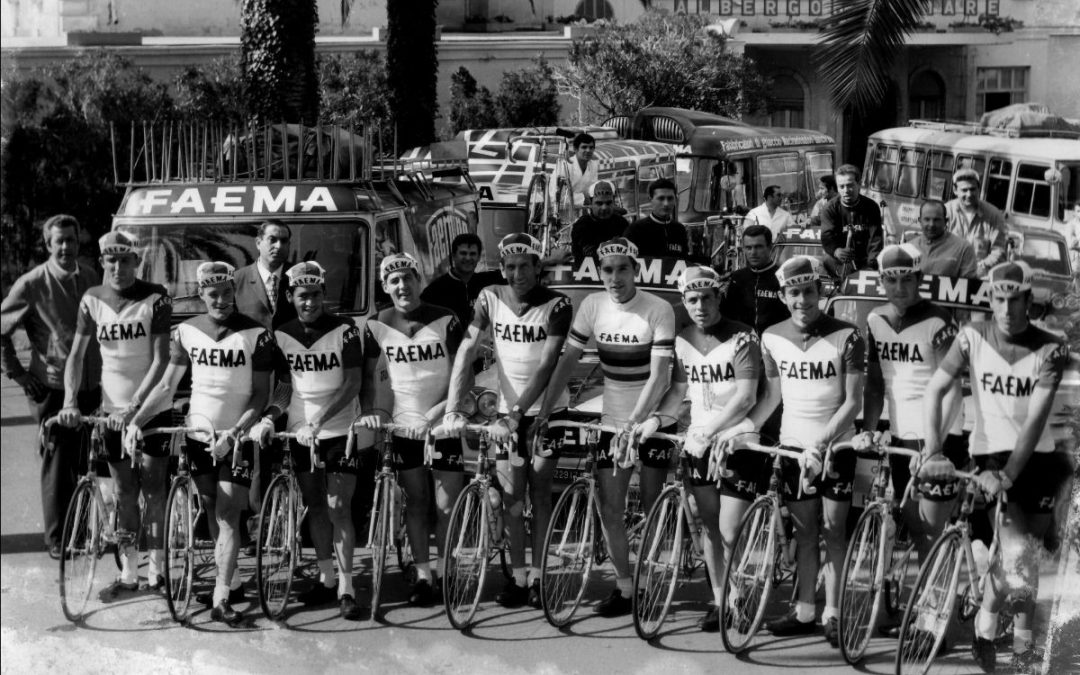 A three-year collaboration that sanctions Faema’s return after 50 years in the world of cycling with a new look made up of technological innovation and sustainability. The official signing of the agreement at MUMAC, the Cimbali Group Coffee Machine Museum, together with Mauro Vegni, Director of the Giro d’Italia, and the members of the historic Faema team

The Giro d’Italia 2022 sees the return of Faema, the Cimbali Group brand which – starting from this edition and for the next three years – will be the official partner of the much loved and very popular cycling competition. The presentation and official signature of the collaboration was held today at MUMAC, the Cimbali Group Coffee Machine Museum, in the presence of Enrico Bracesco, Cimbali Group general manager, Maurizio Cimbali, Cimbali Group president, Mauro Vegni, director of the Giro d’Italia, some members of the historic Faema team such as Marino Vigna, Vittorio Adorni and Antonio Bailetti, former professional riders of the Giro.

A partnership that rekindles in the hearts of enthusiasts that ancient love that has been going on since the early 50s of the last century and that today is found with new characteristics, declined in various activations within the villages present in the various stages of the Giro inside. of which the company will show how the Faema brand has evolved over the years by focusing on technological innovation, digitization and sustainability. In the following years, the Hospitality areas will also be animated by activities organized by the group.

It is with great pride and a pinch of emotion that we announce today this partnership with the Giro d’Italia which tastes of rediscovered love, after 50 long years – said Enrico Bracesco, general manager of Gruppo Cimbali. A choice undoubtedly related to Faema’s historical link with the world of cycling but intended to be able to tell the evolution of an extraordinary brand, always in step with the times, innovative and avant-garde able to give consumers all over the world a unique coffee experience.

It is a real pleasure to find in the great family of the Giro d’Italia a company of great international standing such as the Cimbali Group, with its historic brand Faema. A partner closely linked to the world of cycling and the Corsa Rosa with the historic formation that, between the 50s and 60s, won the Giro in 1956 with Charly Gaul and in 1968 with Eddy Merckx as well as winning the team classification in the 1961, 1962 1968 commented Mauro Vegni, director of the Giro d’Italia. The Giro d’Italia is a great national and international showcase, a passionate sporting event, a multimedia communication platform capable of guaranteeing all our partners enormous visibility thanks to the more than 200 countries in the world in which it will be broadcast.

The protagonists of all the stages will in fact be the three espresso coffee machines that are the symbol of Faema today, the iconic E61, the Faema President and the latest arrival Faemina, the espresso machine designed for the home and small businesses: all lovers of cycling and Faema will therefore be able to enjoy an excellent coffee prepared with various machines of the brand including Faemina, which in the last stage will be shown in the Limited Edition Rosa-Giro version.

But that’s not all: the FAEMA President GTI machines and the iconic E61 will also be present in the villages in Limited Edition. Furthermore, thanks to the collaboration with Technogym, a Technogym Ride will also be positioned in each village, the new bike designed by cyclists for cyclists that will be connected to the Faema club in Strava, to give a unique custumer experience to all those who want to ride inside the stand and at the same time contributing to the support that Gruppo Cimbali offers every year to disadvantaged communities in developing countries through the non-profit association World Bicycle Relief. The non-profit organization specializes in large-scale and comprehensive bicycle distribution programs to help reduce poverty where even the most basic means of connection are lacking. On the basis of the km reached, in fact, an economic donation will be made: the more you pedal, the more you contribute to the cause.

There is also space for the MUMAC Academy which, in some stages, will be present with its Trainers and Coffee Specialists to tell the true Faema coffee experience.

During the presentation, the guests were able to photograph the Maglia Rosa 2022 and the legendary Trofeo Senza Fine of the Giro d’Italia, which contains the story of men, emotions, popular culture and has always been a symbol of the passion for cycling engraved on an eternal material. like copper.

To celebrate the partnership, the temporary exhibition “Love without end: FAEMA for cycling” was also set up at MUMAC with priceless objects, historical documents and unpublished materials, including the first pink jersey in history won by Learco Guerra, in loan from his nephews Learco and Carlo, and a vintage bicycle by Eddy Merckx, kindly granted by the Madonna del Ghisallo Cycling Museum with which MUMAC has been pursuing a historic partnership for several years. This exhibition will be open to the public from 15 May to 30 June 2022. 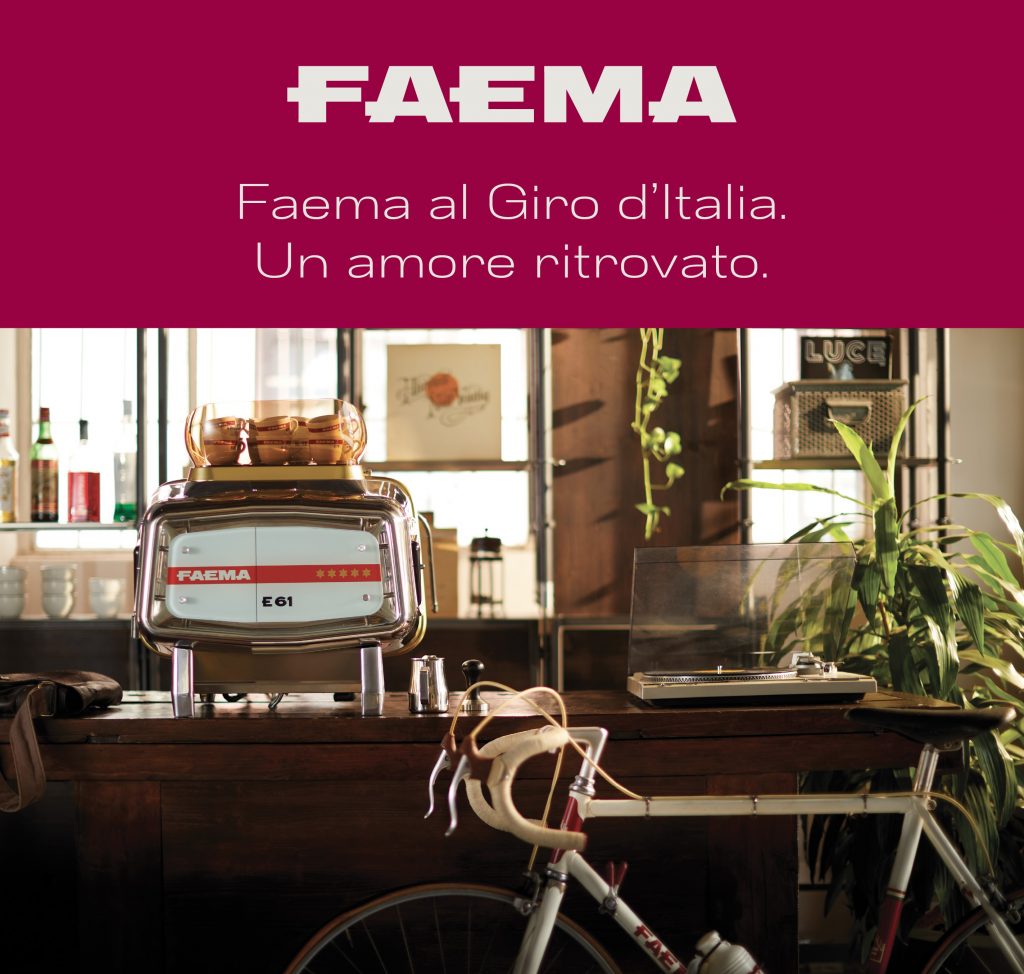 Gruppo Cimbali is one of the leading manufacturers of professional machines for coffee and milk-based beverages and equipment dedicated to the cafeteria. The Group, which includes the La Cimbali, Faema, Slayer and Casadio brands, operates through three production plants in Italy and one in the United States (in Seattle, where the Slayer brand machines are produced), employing a total of about 700 employees. The Group’s commitment to spreading the culture of espresso coffee and enhancing the territory was realized in 2012 with the foundation of MUMAC – Museum of the Coffee Machine, the first and largest permanent exhibition dedicated to history, the world and to the culture of espresso coffee machines located within the Cimbali Group headquarters in Binasco. MUMAC hosts MUMAC Academy, Gruppo Cimbali’s coffee machine academy, a training, dissemination and research center. 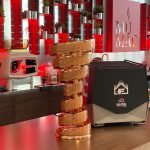 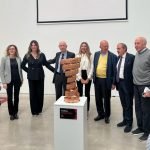 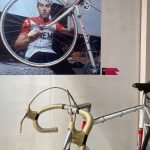 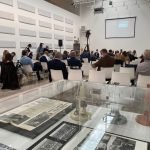 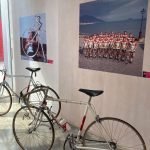 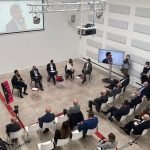 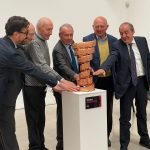 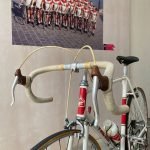 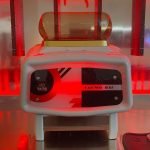