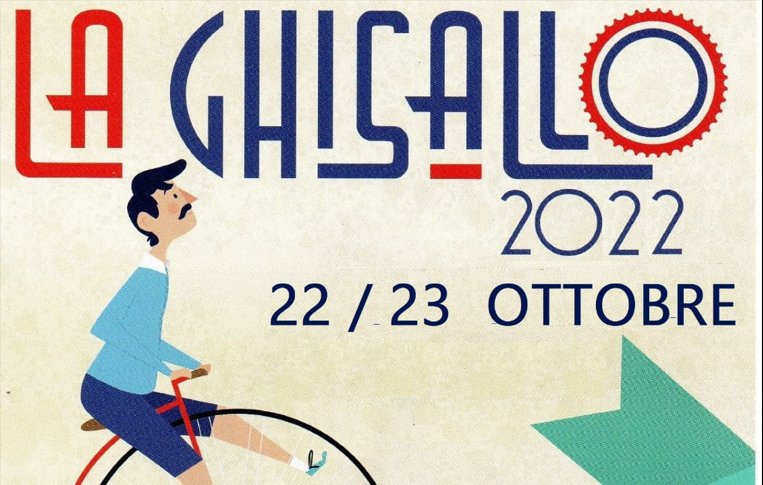 The aim of the initiative is to raise awareness of the LOMBARD territory of “VALLASSINA” with its historic centers, Romanesque churches, ancient villages preserved over time, their streets, which have always been the scene of epochal challenges of great cycling champions, from travel with a special ecological vehicle, the BICYCLE, for the occasion, strictly PERIOD.

Also this year the event will take place over two days.

It begins on the afternoon of Saturday 22 October with a team relay from Bellagio to Ghisallo, 9 km of ascent on a total of 11 km of route, with an average gradient of 5% with peaks of 14% and a difference in height of 540 meters. . The teams can be made up of 3 or 6 athletes with 2 or 5 bikes prior to 1987 and one before the 30’s that will cover the specific section Guello – Civenna. The departure is scheduled from Bellagio at 3.30 pm, from the Visgnola traffic light. The meeting point for relay participants is in the Ghisallo square at 2.30pm. The group will descend compactly accompanied by the escort bikes towards the respective change points.

The first-placed team will have as a prize a wool sweater made in just 10 pieces specifically for LA GHISALLO 2022 on the model of Wilier Triestina, in honor of Fiorenzo Magni, whose tenth anniversary of his death occurs. There will also be the delivery of the black jersey to the latest team.

On Sunday 23 October the sixth edition of the classic La Ghisallo Cyclist will officially start at 9.30 am from Piazzale del Ghisallo. It is possible to participate with vintage bicycles (prior to 1987) and with clothing strictly appropriate to those years.

The route winds through the Province of Como.

The departure is from the GHISALLO hill in Magreglio, the town where the Lambro river originates, and where the Sanctuary dedicated to the Madonna delGhisallo since 1949 patron saint of all cyclists, and the Madonna del Ghisallo Cycling Museum (Cycling Museum), temple of world cycling, strongly desired by the Lion of Flanders, Fiorenzo Magni, both symbolic places, where you can breathe history of cycling.

Inside they are exhibited bicycles of great champions such as Coppi, Bartali, Motta, Moser, Casartelli, Alfonsina Strada, the first woman to have participated in the tour of Italy, and jerseys of champions and champions,

The arrival at Colle del Ghisallo is expected around 13.30.

There are three refreshment points along the route: the first in Sormano at the foot of the Wall, the second in Erba within the Majnoni Park, the third at the Flying Tartufo Gelateria in Canzo.

And arrived at the Colle del Ghisallo Grand final refreshment with awards.

Testimonial of the event great champions such as Marino Vigna, Olympian of Rome 1960, Imerio Massignan, become a legend as the only runner not to put his feet on the ground on the climb of the Muro di Sormano, included for the first time in the route of the Giro d’Italia in 1962, and the multiple champion Mary Cressari.

The Berruti family and Giancarlo Brocci will be with us pedaling with the participants. In addition, Giancarlo Brocci on Saturday evening at 8.45 pm will present his new book entitled “Thecycling according to me” at the Ghisallo Museum.

On the square of GHISALLO on Saturday and Sunday there will be the traditional MARKET of La Ghisallo, with vintage bicycles and spare parts, and of course with stands of typical local products.

An event of a sporting, tourist, but above all cultural nature, of great spectacle for both cyclists and the curious.

All this in order to enhance the deep ties that unite the history of the Larian Triangle with the province of Como where the GHISALLO hill is located.

It is possible to register through the website https://laghisallo.eu/ (until 21 October at the discounted price of 25 euros including the race pack), or directly on site on 22 and 23 October at a cost of 30 (always inclusive race pack)

We thank Caffè Chicco d’Oro for the collaboration. 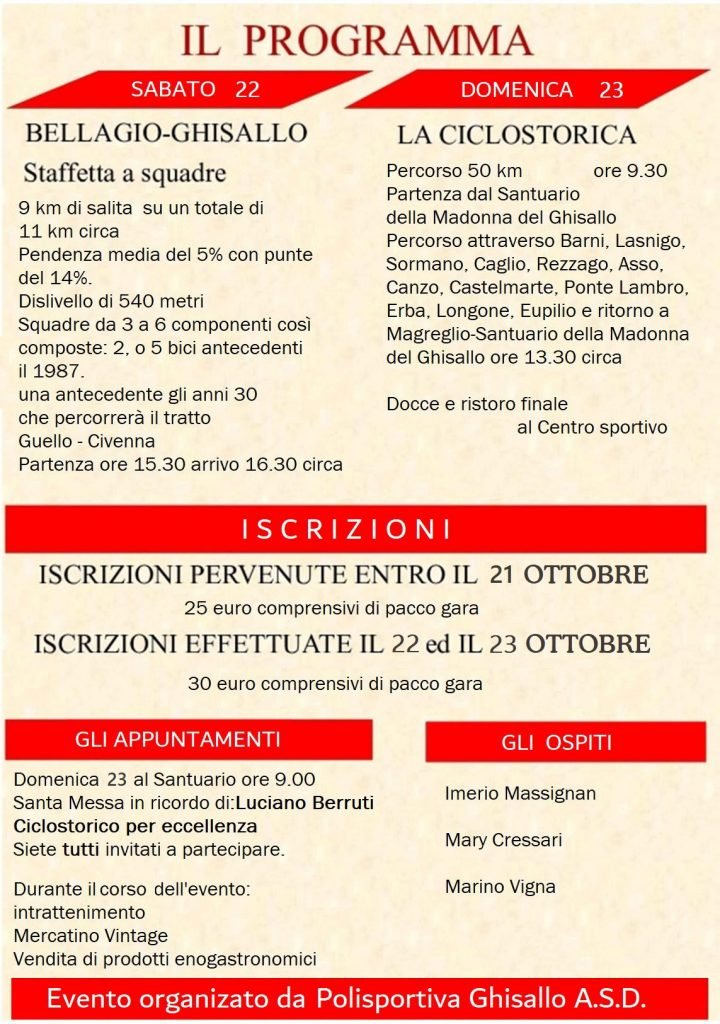