Let’s speak about the Tour of Lombardy 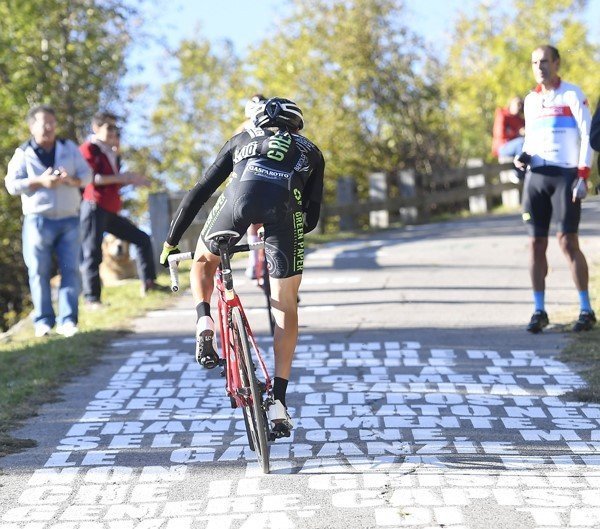 The Tour of Lombardy is the lighthouse race of the Ghisallo Museum. The pass is as sacred as the neighbouring sanctuary, such as the Cyclists’ museum. Here is an article took out from the web site Corricon.me for Europe Assistance which outlines a piece of history, street, land, racing. That’s in our DNA.

by @lucianarota. It brings the autumn of the great cycling; but it’s just a matter of colours and season. The Classic race “of dead leaves” – a sort of nikname – is certainly not the prelude to the end of cycling. In fact, the Italian, European such as the global cycling does no longer ends: nowadays cycling is practised in all seasons and all year round. The Tour of Lombardy is also a revenge on the World Championship Race: a one day long race to conquer the Championship title. In the same way, the Tour of Lombardy is a unique race: you win it or die. And then the infamous Muro di Sormano (the “wall” due to its slope) on which you have to show your athletic preparation especially if you wear the world champion jersey. Then the year ends, so the Tour of Lombardy remains in the history of cycling of each year. It is not a talent show: the Tour of Lombardy requires a real athletic preparation because all its racers aim to revenge the world championship jersey. For this reason, all over the world the Tour of Lombardy is recognised as an world race. That’s why on October 13, 2018, in Bergamo, the Tour of Lombardy counts at the start line all the protagonists of the World Championship Race of Innsbruck. Together with the veteran Valverde, there are also the challengers Romain Bardet and Michael Woods as well as the former champion Vincenzo Nibali, who won last year on this route his 50th success in his career. The Shark has already twice scored a red circle on the map of Lombardy and he is sure that it will try again. As Gianni Moscon will try, the best blue at the World Cup, a true fighter in great shape as Thibaut Pinot, Julian Alaphilippe, Greg Van Avermaet, the twins Adam and Simon Yates, winner of the Vuelta de España, Enric Mas, Rigoberto Uran, Tim Wellens, Primoz Roglic, Rui Costa, Wilco Kelderman, Michael Matthews and Bauke Mollema. In short, the Giro di Lombardia has a heart of autumn that beats very strong and finds the blessing of Our Lady of Ghisallo, up there in Magreglio, where to spend is a bit ‘ praying. To win it for the story. Book recommended. is a song from a collection of writings kept at the Museo del Cycling Madonna del ghisallo di Magreglio | Ghisallo Literary Prize. It is an act of the epic of Ghisallo. The autumn yearches engraved with the mud imprint on the fatigue of the runners, meter after metre, from the junction of Bellagio up. The surface of Lago Diaccia, motionless in the melancholy scenario of an early winter carved up on the slopes of San Primo. And the bells of Don Viganò that chimes in forced expanse, on the croak of a disc, in the elegy of a pale Madonna, agoniously mother of all those boys who climb, recognized and encouraged to the voice of the fans of the troubles from every where. From “First love cycling”, by Franco Rota, 1989 Recommended Video: Fausto Coppi wins the 48 ° Giro di Lombardia. From the Historical archive Luce | Cineteca Museum of Ghisallo. A tribute to the champion because the 2019 will be the year of the centenary of Fausto Coppi: Https://youtu.be/UH5xnrYTvyI