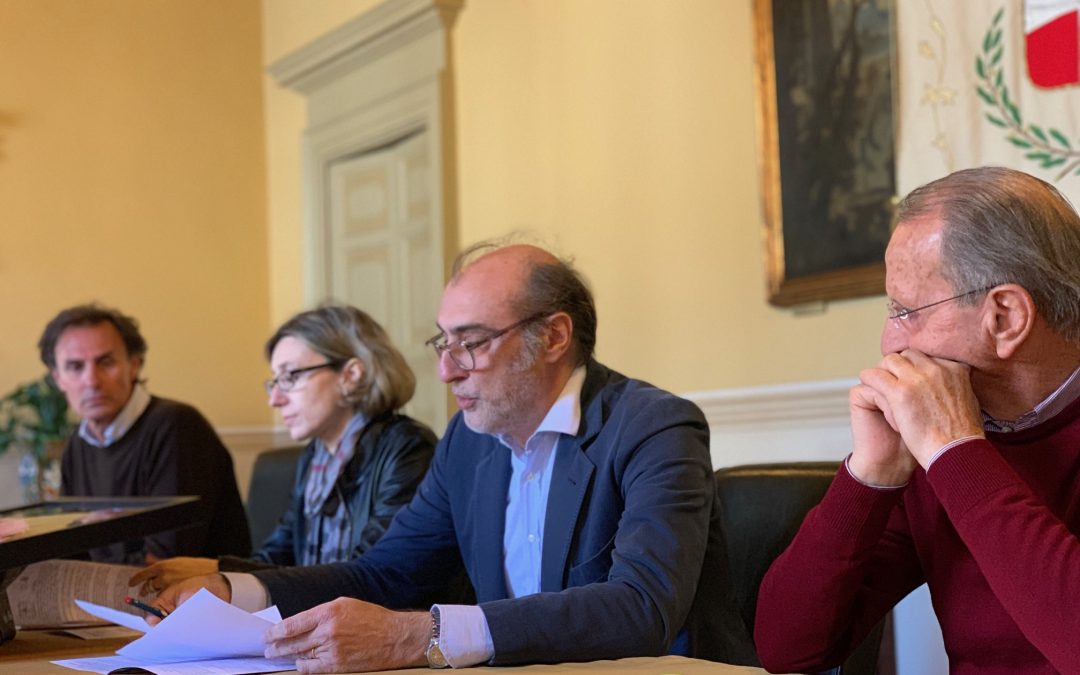 The exhibition is an important event linked to the Giro 2019, edition n. 102, in Como after 32 years. The Exhibition opened – dfrom Saturday 4th to Monday 27th  at Broletto Palace , under the title Temporary Ghisallo Museum  is a touching journey among memorabilia, images, voices and video. The visitors will live memories and emotions; will admire jerseys, and of course bicycles loaned directly from the Ghisallo Museum Collection in Magreglio. At the center of the exhibition there will be some bicycles particularly important for their history that evoke the big sporting and human endeavours of the three men who have made the history of cycling : Coppi, Bartali e Magni.

This exhibition is a tell that watches towards the Ghisallo Pass, his story, his mountains, his museum, remembering Paolo Rosola sat the finish line in Como
in 1987 in the same Giro d’Italia that seen Visentini and Rocheas main protagonists. A story that brings feelings and memories to the Ghisallo Sanctuary which celebrates Fausto Coppi’s 100° birth anniversary.

« A. Volta Foundation has decided to organise, together with the municipality of Como, events awaiting the arrival of Giro d’Italia’s stage – declares Luca Levrini president of FAV- . To prepare, even culturally, the city at this sporting moment is in fact essential both to generate awareness of the importance of this event and to activate in each of us the positive daily values that could bring a sport like cycling».

< P style = "FONT-weight: 400;" > «The Giro d’Italia is not just a sporting event, rather it is a time that allows us to reflect on some aspects that affect the culture of sport. Among these is the Italian sports tradition and of our territory, the value of sport as a profound sacrifice and healthy competition , collective and popular participation in an event, health, ecology and sustainability of moving with a bicycle. For this reason – continues Levrini – we have organized an initiative for the middle schools of the city, the screening of a film and three meetings with personalities from the world of sport. The initiative for middle schools intends to reach more than 3.000 students with a booklet that will be delivered by students of Motor Sciences of the University of Insubria».

< P style = "FONT-weight: 400;" > «The booklet contains a personal writing by Vincenzo Nibali , news about the Cycling Museum Madonna del Ghisallo and discussion with teachers and families on health and the bicycle as ecological means of transport. The meetings for the population will see alternating authorities related to the world of cycling that will address similar topics such as health, environment, innovation and solidarity . The film will want to give importance to a fundamental figure in the ethics and the role of team of cycling: the gregarious . These initiatives intend to give the value of sport a cultural significance that draws on the values and virtues of cycling also ideas to face the everyday life».

< P style = "FONT-weight: 400;" > The enthusiasm of the FAV President Luca Levrini joins the Antonio Molteni , president of the Ghisallo Museum Foundation, who said : « every time that sportive organizations, institutions, associations and people, common people mostly, find an opportunity for a passage or for an involvement of the Museum of Ghisallo, for us it is a feast. And prepare a party with commitment and dedication, for the passage of the Giro but not only, even for the arrival of the tour in Como, is this time a reason for more pride. It is for many reasons. It is because it would have made our founder Fiorenzo Magni happy, it is because this year of reasons to celebrate there are many: the 70 years of the sanctuary in Magreglio that coincide with the 70 years of Polstrada following the races, great friends of cycling always , the 100 years of Fausto Coppi who happens to be 70 years ago, just in his victorious 1949 year in which he won everything, decided to establish the record of the climb of the Passo Ghisallo winning the fourth consecutive (1946, 1927, 1948 and 1949) of his 5 laps of Lombardy (the last N El 1954). We’re ready for the party, then! Also at Ghisallo: with its temporary exposition to the prestigious Broletto of Como and with the colorful and engaging of Riccardo Guasco on display at the museum. Our museum is in the middle of its 13th Museum station and will live two beautiful days, on May 26th with the passage of the race and a marathon of events and on May 27th with other events and visiting school… Long live the tour and live also Como, but before and after we wait for you all to Ghisallo! »

< P style = "FONT-weight: 400;" > Claudia Striato, Director of Foundation A. Volta added : « the Giro d’italia conquered us, fascinated, involved in a cultural festival that touches a little ‘ all the Artistic sensibilities. I would never have imagined that the direction of the Broletto I would have dealt with cycling, and its history, of humanity that ride and never alone, of literature of the bicycle and its values. an engaging festival which is translated – event after event – Waiting for the tour in words, images, videos, emotions, sounds, memories, anecdotes and thoughts facing the future. A choral need to testify, all, in a different way, the passion for the two wheels, which are strongly related to the history of Como and its people. We wanted the bike, even here at the Broletto, and we just have to pedal. The direction is the right one: the common thread is the pink. Pink as the ride! We are waiting for you in Como».

«The passage of the Giro – A history of 110 years that never loses enamel – always has an exciting effect. declares the director of the Museum of Ghisallo, Carola Gentilini , who is also alderman at the culture of the commune of Como- a pink trail that contends . That people like. Brings joy, carries positive energy. It is an even more beautiful passage when the pink race becomes a milestone, a city of stage as it is said in jargon. Then, as happened in Como, all the natures of man melt for a cause: it becomes cultural, artistic, literary, economic, commercial, even ecological pretext and – fortunately – even touristic! So the team becomes a Professional Team and brings together foundations, museums, professionals, professors, experts and enthusiasts, young and old: all for a cause, promote the arrival of the tour and homage to cycling, its values, its history and its present, which is also future and ride with great enthusiasm in a land that has a passion for the two wheels in his DNA » .