LEONARDO DA VINCI, THE GENIUS, AT THE CYCLING MUSEUM 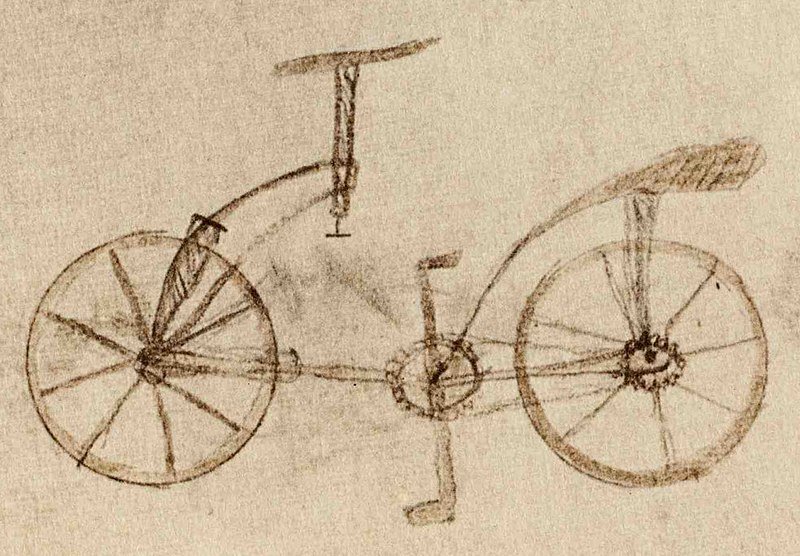 An evening dedicated to the universal artist Leonardo da Vinci. Leonardo Da Vinci: artist, painter, scientist, inventor… There are many definitions that can be given to him, but undoubtedly the one that suits him best is that of genius. A man of great ability, lived in the Renaissance period, he perfectly embodied the spirit of his time by expressing himself at the highest levels in different fields of knowledge and art. There are many, too, the mysteries related to his figure. Many want him musician, other pastry chef. He was certainly an eclectic, curious and highly intellect man, but it is difficult to define with certainty all these hypotheses. Will the bike have really been his intuition or is it the result of a rear touch-up? We will try to understand it together in this evening designed to “solve” this little mystery. However, our journey does not end there. It continued into the following centuries. The actual invention of the bicycle took place long after Leonardo’s existence and from there began the history of cycling, a long and passionate history that led to the proclamation of Our Lady of Ghisallo “Holy Patron of cyclists”. The history of the Shrine began long before, in medieval times, thanks to the promise of Count Ghisallo and above all to the help that Our Lady granted him.

Organizers and program We are a group of young people from Magreglio who collaborate with #Youthlab, a project designed to reactivate the youth of our territories. We have already organized other events and are now working on our project to bring the Palio back to Magreglio. This is a challenge in organizing a cultural event in agreement with the Ghisallo Cycling Museum. Our aim is to show the beauty of our country, which must be rediscovered and lived. The event was designed to celebrate the 500th anniversary of Leonardo da Vinci’s death and the 70th anniversary of the proclamation of Our Lady of Ghisallo Patron of cyclists. It will be held on Saturday August, 17th at the Ghisallo Cycling Museum, after a visit to the Sanctuary, at 6:30 p.m., made by us. 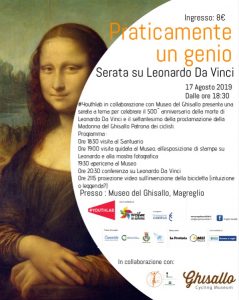 Then we will proceed with a guided tour of the Museum Collection followed by a buffet at 7:30 p.m. There will also be an exhibition of vintage photos of Ghisallo, to show the changes that the Sanctuary has had over the years and an exhibition of prints on Leonardo da Vinci to quickly retrace his most important works. We will then continue with a dialogue on the life of the great Italian genius and a reflection on his alleged invention of the bicycle. The evening will end with a short film around the invention of the bicycle linked to Leonardo: intuition or legend?

Fee 8,00 € per person; the amount collected will be destined for our project to bring the Palio back to Magreglio.